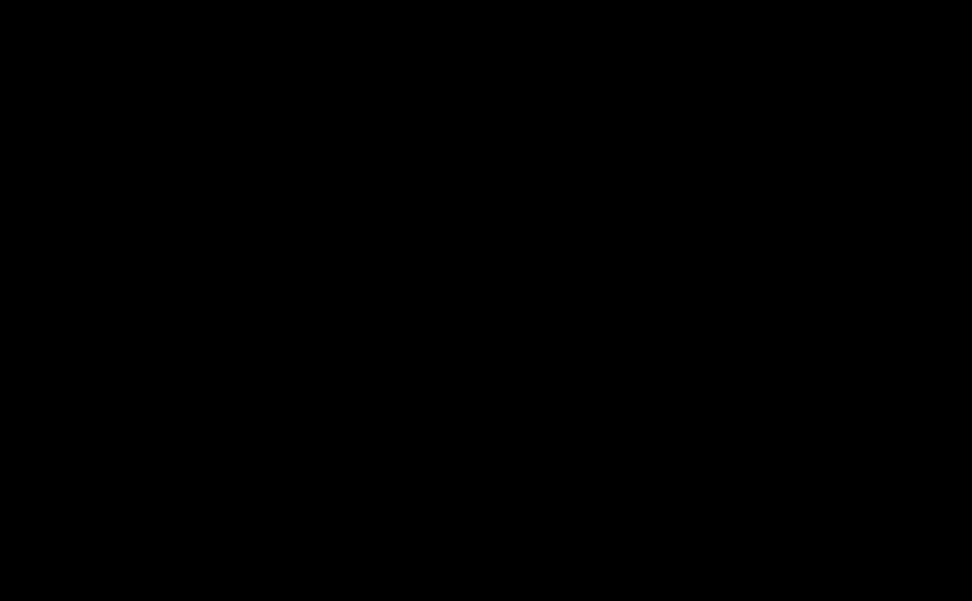 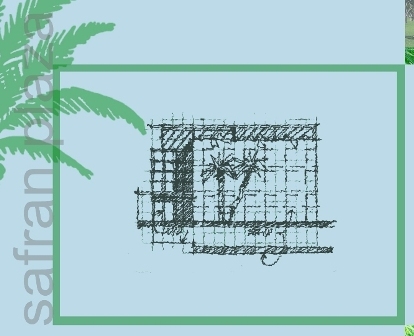 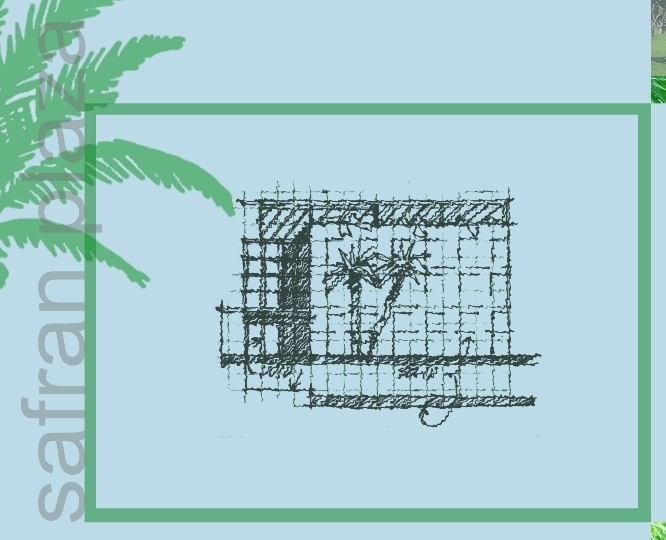 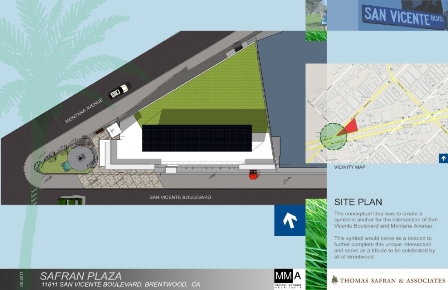 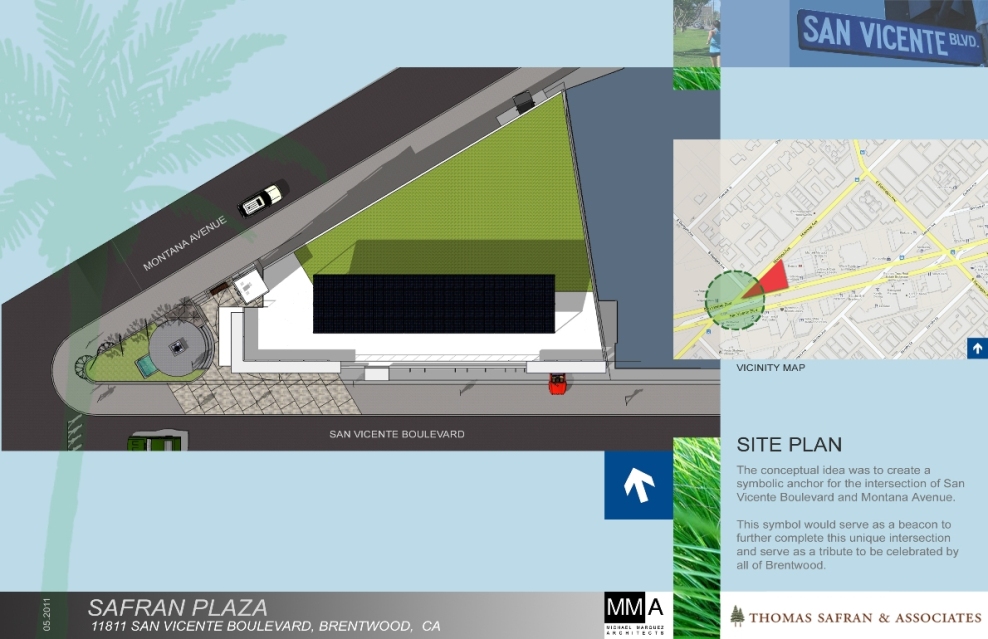 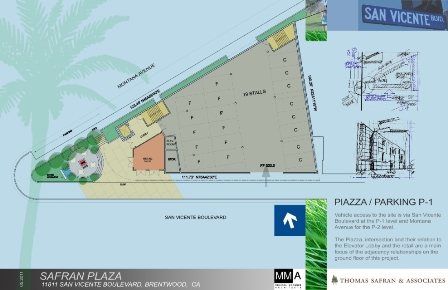 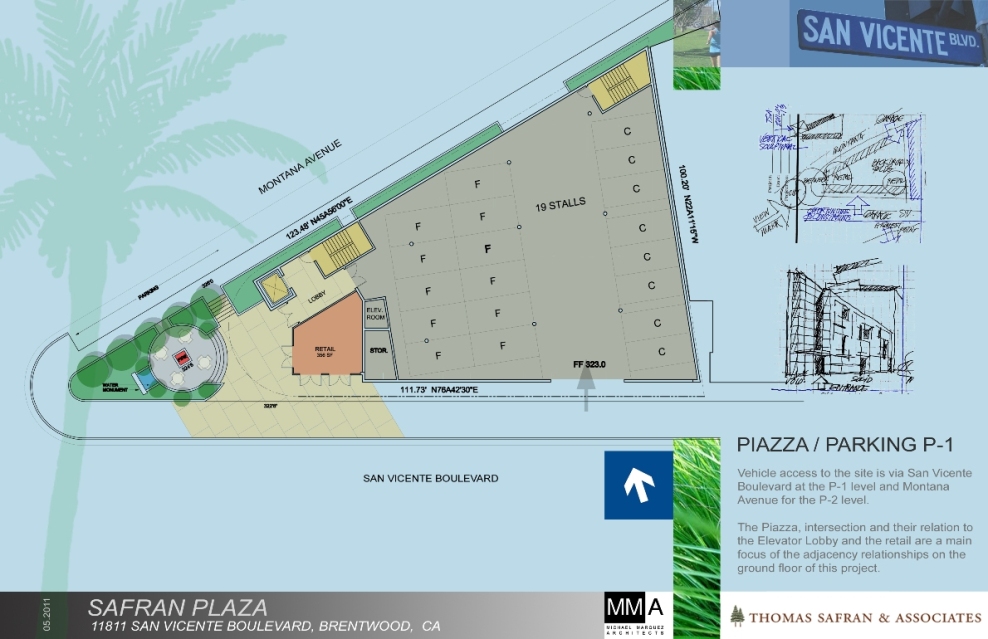 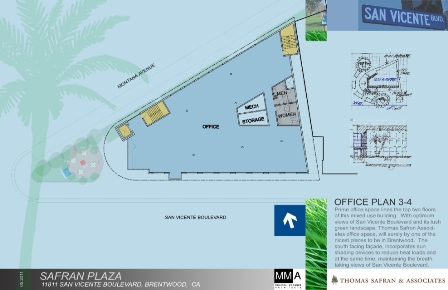 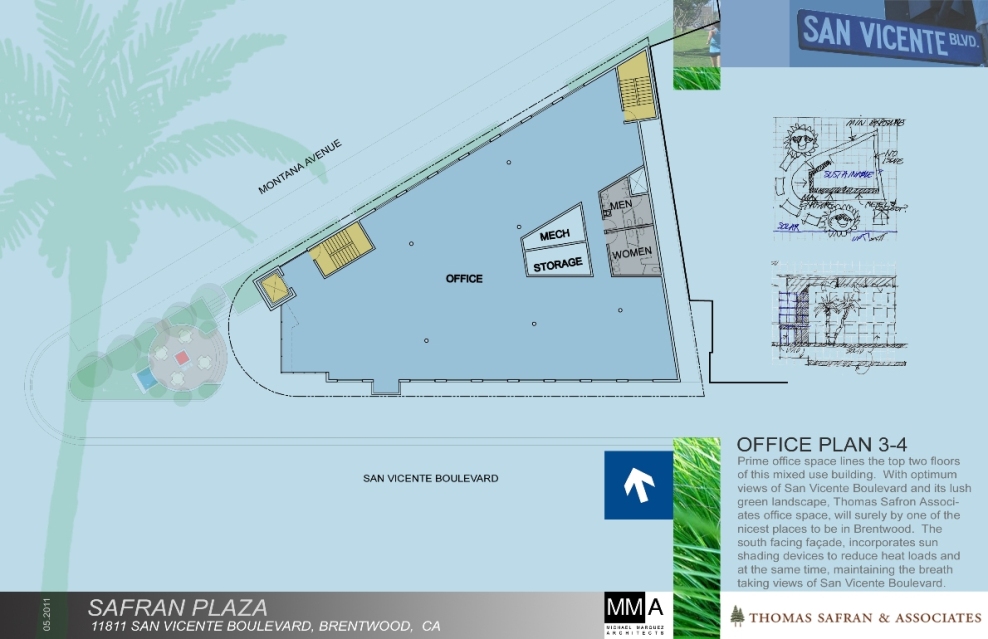 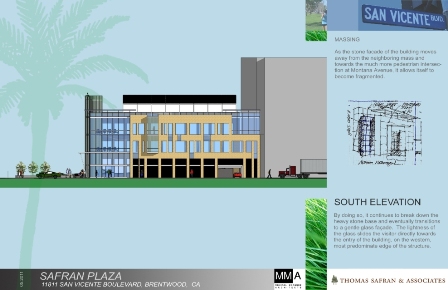 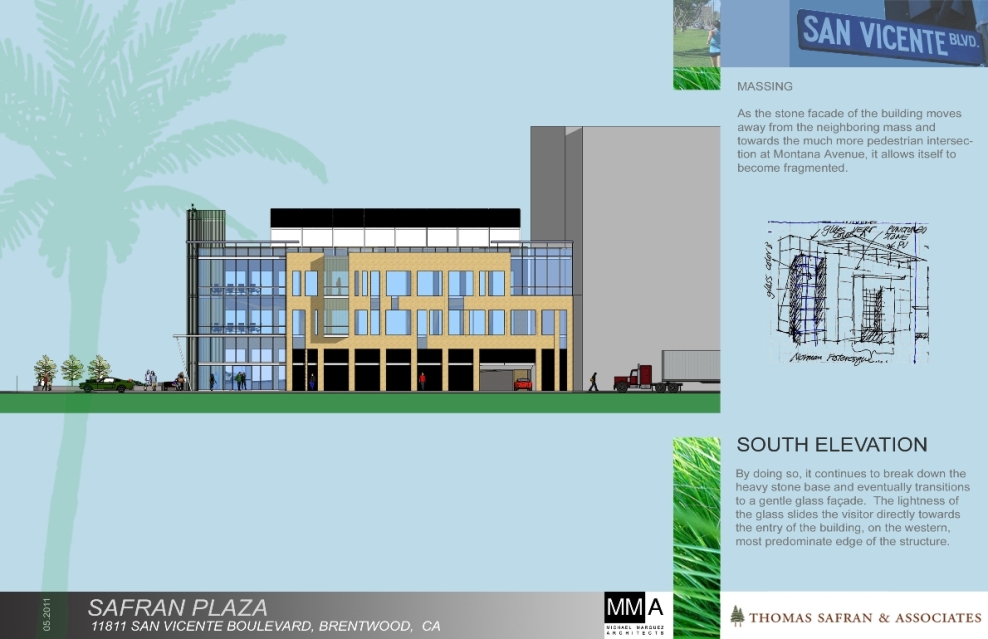 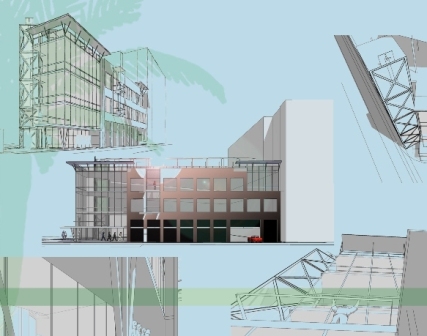 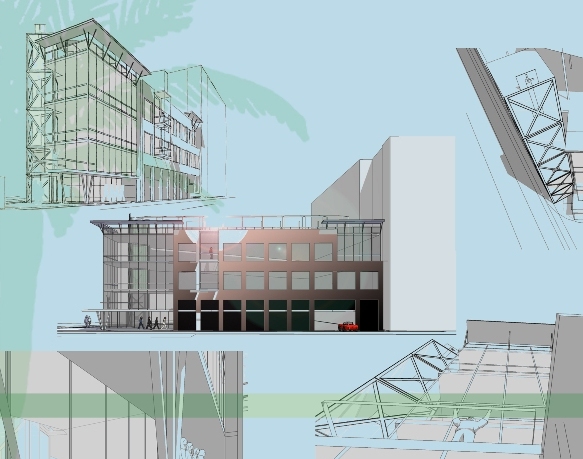 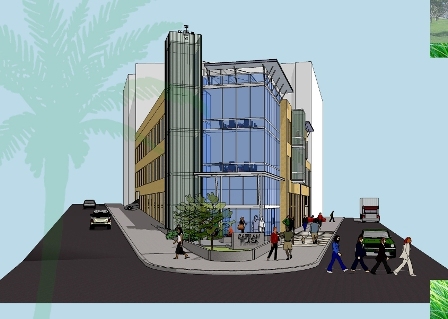 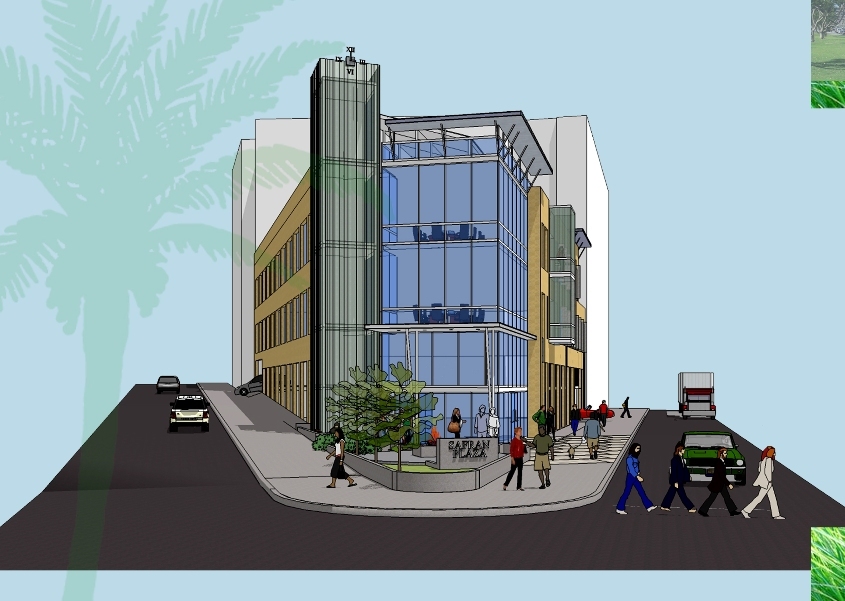 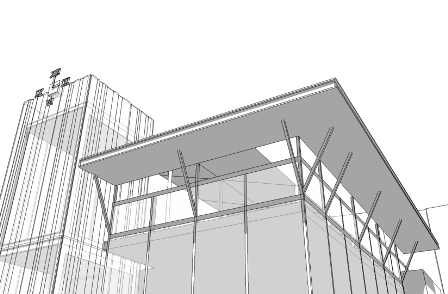 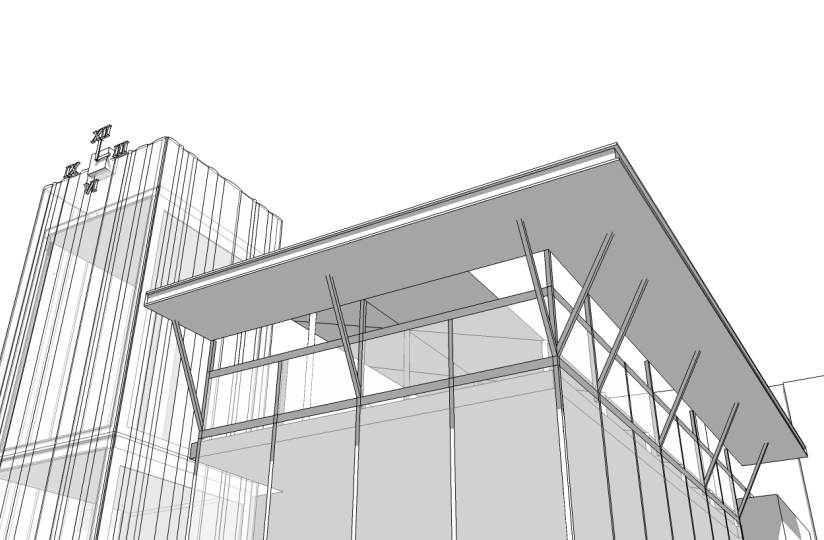 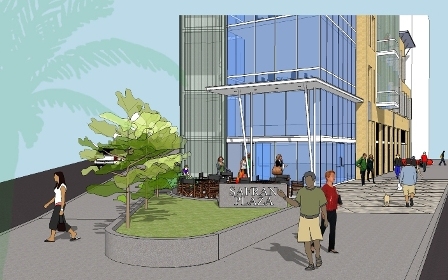 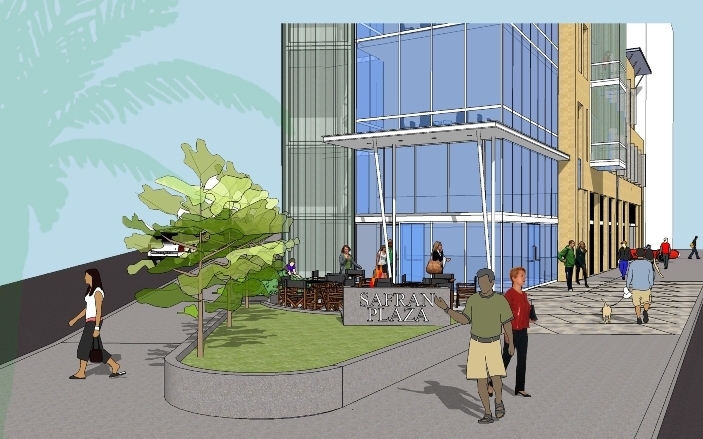 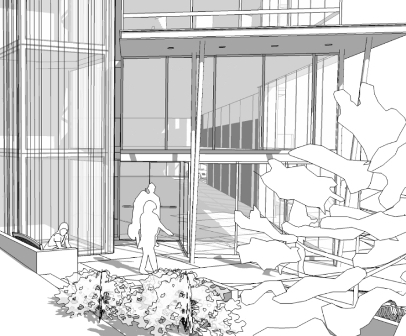 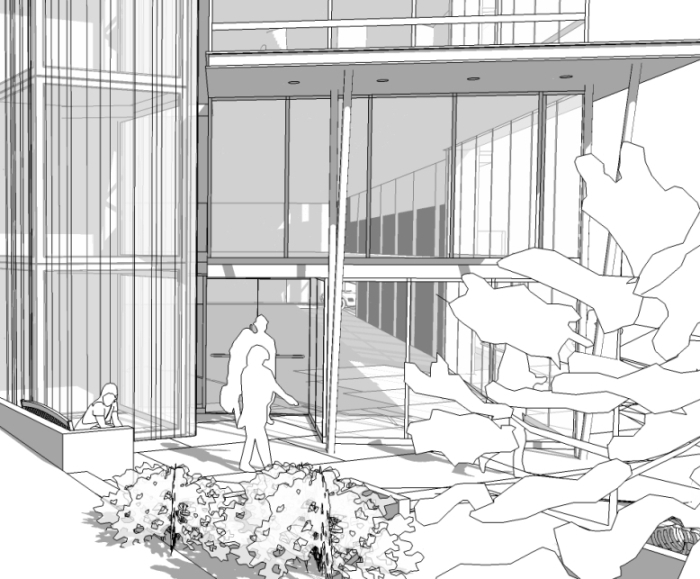 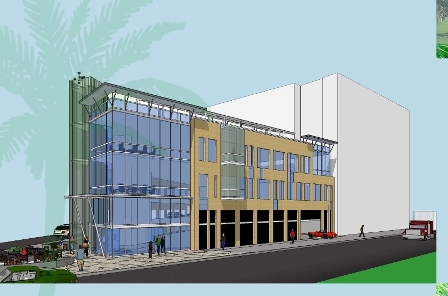 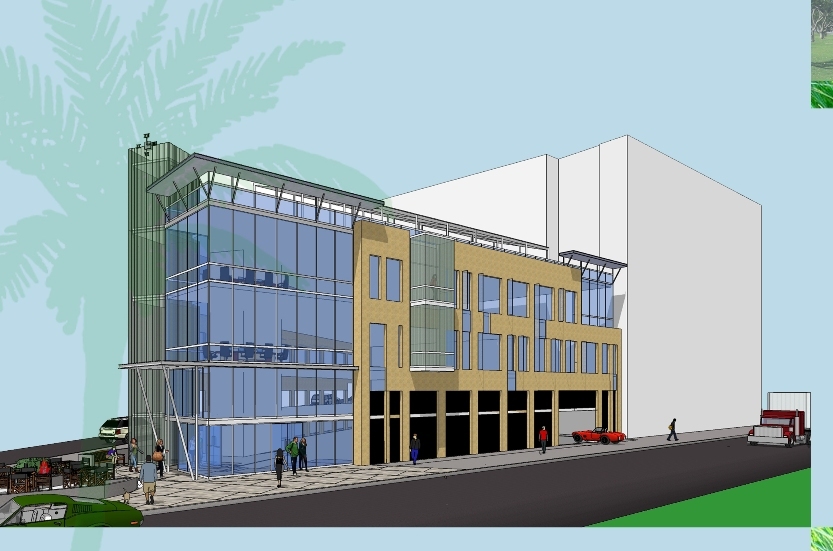 This project is for our close friend Thomas Safran, who's company, Thomas Safran and Associates (TSA), is currently in a large office building across the street from our offices in Brentwood. Tom's company has been a fixture in our neighborhood for over 30 years, but he is hoping to move his current offices into his very own building on the north side of San Vicente Boulevard.

The focus of this project was to uncover the best way to utilize an unusual triangular site at one of the most identifiable intersections in West Los Angeles - San Vicente and Montana. The project also had the enormous challenge of creating a structure that would equal the magnitude of TSA.

Joining MMA for this very special endeavor was Robert Jacques and Alex Gentile, who bring immeasurable talent and creativity to the table. Their collaborative work on the Citadel, Beijing Olympic Park and Fresno Gateway speak for itself.

We designed the building with two floors of above ground parking and two floors of office space directly above. The ground floor also contains a small retail space to serve the outdoor plaza in front of the building. The massing of our building takes its cues from the monolithic 10-story neighboring office building's base and uses it as a springboard. A four-story granite wall with rhythmic punched openings makes its way from the adjacent building and gently breaks down before revealing the all-glass facade as our building reaches the pointed corner of the intersection.

The corner of the building is highlighted by the elevator tower, which is topped by a large clock. However, while the clock keeps time of the passing day, the tower would become the symbol of time itself.

The elevator shaft was shrouded in frosted glass with vertical beveling. The elevator cab would be lit from above and below and provide a kinetic energy representing daily movement of life. However, following in the footsteps of other landmark structures like the Empire State Building, we would use colored lights to mark the changing periods of the year; Valentine's Day, Fourth of July, Halloween, Thanksgiving, Chanukah and Christmas, just to name a few.

Also, in a city yearning for focal points, Thomas Safran Plaza symbolizes an amazing opportunity to establish a great gathering place and identity for a deserving neighborhood. The plaza becomes the location for major events during the year to be celebrated and provides an excellent location for the Brentwood Christmas tree and menorah.

After decades of service, creating benchmark affordable housing projects for all of Southern California, Thomas Safran and Associates has established itself as an essential component of the community. These new offices will reflect their prominence and leave a lasting symbol of their achievements. And give Tom one more reason to smile.